The Evolution of Retouching – A History Lesson

A great article written by my friend Kate Chase for Commercial Arts Magazine. Kate spent many years in the business of commercial advertising and her previous agency Kate Chase Presents specialized in representing retouchers as artists/craftsmen. In this article Kate describes the early days of retouching prior to the digital age and moves through the evolution of the retouching industry of today. A must read!

Whenever folks in his industry—wine and cheese—ask my husband what I do for a living, he tells me that he sighs inside. Odder perhaps is the fact that even though I’ve been involved in the photo-retouching business for exactly 25 years, when the same inquiries come my way, even from my industry, I sigh the same sigh. Years in the making, the sigh represents knowing that I won’t be able to explain exactly, or succinctly, what commercial retouching is—and do it justice.

Born into a non-retouching family in Cheshire, Massachusetts, I couldn’t have scripted that in 1983, at age 23, I would find myself recruited, through a friend, to Hollywood. The job: In-house delivery person for Wild Studio, an art services shop. At that time, Wild Studio was a third-generation, family-run business that had been providing retouching services to Los Angeles agencies since 1959. My job evolved into an integral role in that I would sometimes review verbally, marked-up imagery from art directors and print production managers. “Katie from Wild” came to be on a first-name basis with receptionists and guards at the studios: Columbia, Warner Bros., Fox, Disney, Universal, Republic; record companies: Capitol, A&M, Warner, Virgin; and ad agencies and design firms all over town. I got to know all the streets, shortcuts and key phone booths of Los Angeles. My early observations were that retouching involved airbrushing and/or some chemical alterations to photographs. 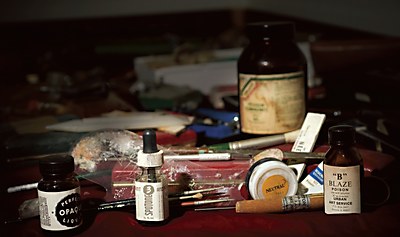 (Charlie Wild's tools of the trade—bleaches, dyes, brushes, curves, etc.) When Charlie Wild retired, there were anxious art directors and production managers all over Los Angeles needing assurances that his absence wouldn’t change their retouching. Wild was their craftsman savior, quick and intuitive with art direction and the tools of the trade.

In researching family details with his grandson Tim Wild, he confirmed that Henry Wild had seen early manipulating by airbrush artists on black-and-white photographs during his WW1 military service in France. Later in 1930, Henry moved his family to New York to apprentice at a retouch studio.

Photo-retouching for newspaper reproduction by Charlie Wild, circa 1960.

According to a variety of historical data, the American inventor Abner Peeler, searching for ways to distribute paint without pigment, first invented the airbrush. Peeler patented it in 1882 and then assigned ownership “paint distributor” rights on the patent, to Liberty Walkup. Walkup soon patented his own airbrushes—one in 1883 and a second dual-action patent in 1884. In 1886 he formed the Illinois Art School, which specialized in teaching airbrush technique; it was housed in the same building as his airbrush company.

The results of primitive cameras and under-developed tech­nology contributed to a need for airbrush artists to apply non-pigment paint on photos. As cameras evolved, subjects who didn’t like the idea of seeing their imperfections began requesting photo retouching. By the 1890s, photographs had become so popular that retouching factories were needed to meet demand. These factories lasted up until the early 1900s.

In 1945, after having successfully apprenticed with his father for the ten-plus years required to master the craft and its sometimes-frustrating tools, Charlie Wild took his first commer­cial job retouching on a wide variety of imagery at a New York newspaper. These airbrush photo-illustrations, if you will, would then be screened using the half-tone engraving process developed in the 1880s, and printed onto newsprint allowing the newspapers to run pictorials instead of illustra­tions. It was a good start, but being an art pioneer, Wild moved his family west to Los Angeles in 1959, and founded Wild Studio.

His effects and techniques with paints, through Paasche or Thayer Chandler airbrushes, became sought after and a bit legendary. The same hero status was achieved for his artistry with bleach-and-dye techniques, altering the emulsions of the prints themselves. His core philosophy and continued art education revealed itself commercially by using less paint and less overt manipulations. This philosophy was the corner­stone and guiding principle on which all those who came to apprentice, and excel, would be graded.

Photo-retouching then, as now, was far from a traditional career; recruitment has always been difficult given that most masters don’t share retouching secrets. Wild Studio recruited much-needed apprentices through trade tech schools choosing those showing early promise in programs teaching drawing, pen-and-ink and early airbrush skills.

The 1960s provided Wild with new opportunities to apply his drawing skills to beauty campaigns for Max Factor, his painting talents to photo-illustrations for Mattel Toys and his masking and color theory to tinting black-and-white imagery for the art directors at Republic Pictures.

Starting in the 1970s, Wild Studio collaborated with maverick L.A. album cover designers Ria Lewerke and Jimmy Wachtel, iconic designers like Saul Bass, as well as director Norman Seeff and photographer Moshe Brakha. Brakha was, and continues to be, the director of his photography by successfully advocating and bidding to include himself in communi­cation between the art director and retoucher, which differed from the early paradigm in which photographers were kept out of the finishing and post decisions. Brahka’s workflow epiphany came to him on the day he was first allowed to accompany a designer to observe the retouching process firsthand on his cover imagery (commissioned by designer Ria Lewerke for Columbia Records) of Boz Scaggs for the album Silk Degrees. He knew immediately he’d found his full creative voice during that collaboration and has stayed on that photographer/director path ever since. He prides himself on establishing mutually rewarding relationships with retouchers, and explaining their capabilities to his clients.

Link to online article: http://www.commarts.com/Columns.aspx?pub=2102&pageid=901
Why You Need This Site